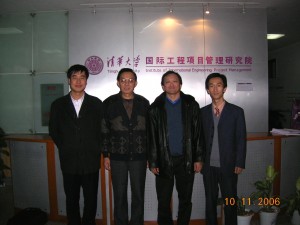 Spurred by a growing economy, China is rapidly adopting Western technology and terminology to advance project management capabilities-hut with its own local twist. I discussed the past, present and future of project management in China with Wu Zhiming, construction management professor at Tsinghua University, Beijing, China, at the September 2006 International Project Management Forum in Hong Kong.

How did the concept of project management apply in ancient China?

Mr. Wu: Although the term project management was coined in the West, the concept has been present since ancient China. For most, the Great Wall will remain the iconic project in the history of China, but there are many other noteworthy projects where project management methodologies were already being used. …

The Past, Present and Future of Project Management in China

Professor Wu is also Director of Beijing Project Management Institute and member of PMI USA. He has more than 40 years of experience of teaching, research and consulting on construction and project management in China and overseas. In 2000, he received the Award of Outstanding Scholar in 20th Century from the International Biographic Center ( IBC) of Cambridge, United Kingdom.

Professor Wu , shares with Mr. SK his thoughts on The Past, Present and Future of Project Management Practise in China.

Mr SK: How did the concept of Project Management apply in ancient China ?

Most people will view the Great Wall as one of the icon projects in the history of China but there are many others. One outstanding success story is the Bian Liang Palace Re-construction Project.

During the Song Dynasty, the Emperor appointed his minister Mr. Ding Wei to re-construct the palace at Bian Liang City. The minister established a comprehensive project implementation plan As he realised the project required a lot of soil, the minister instructed his men to burrow soil from the main road within the vicinity of the palace. After all the soil was dug out a big drainage was formed and he instructed his team to connect the drainage to the main river nearby. This formed a cannel which became a perfect water transportation system to transport materials in and out from the project side which further helped reduce project cost and time.

After the re-construction of the palace, the project team placed all the construction waste into the cannel, levelled it up and returned the main road to its original condition.

Mr SK: What was unique about those projects undertaken during ancient China ?

Prof Wu: Most of these projects were mega construction projects initiated by the Emperor with “unprecedented” project priority. A lot of effort were put into planning and execution to ensure project success.

Prof Wu: In the late 1950’s, the Critical Path Method (CPM) and Program Evaluation and Review Techniques were introduced to China by a well-known Chinese mathematician, Professor Hua Loh Geng.

Professor Hua had taken the initiative to promote these concepts to the working class, and his efforts have since greatly encouraged the adoption of modern project management techniques in the country.

Our project histories, experiences, and lessons learned has become valueable organization assets and form part of our heritage. Our mission is to continue the tradition, as well as adopt and adapt Western technology to further develop our own project management capability.

We need to overcome challenges such as language and terminology. Also we need to realign our focus areas. For example, contractors in China are particularly interested in the areas of procurement and contract administration.

Mr SK: Can you describe the latest developments in Project Management in China?

Mr SK: Can you give some examples of mega projects completed in the last 20 years in China?

Prof Wu: I will start with the “Lu Bu Ge Project” –a World bank funded Hydro-electric Dam Project – undertaken in the 1980’s. The project construction side is located at the border between Yunnan and Guizhou Province.

Upon completion, the dam was to generate 4x150MW electricity. The tunnel project contract was opened for international bidding. Modern Project Management was introduced and it helped to improve quality, shorten the project duration and maximise the return of investment. The project became a distinctive success story in the industry and got the attention of the former Chinese Premier , Mr. Li Peng.

Mr SK: Aside from the success stories, which projects would you consider as challenging?

Prof Wu: Sure. I think the ‘Er Tan Hydro-Electricity Project” is one project that best fits into this category. The project has become an academic case study for “project successfully completed but failed to achieve its intended objective”.

The project site is located at Sichuan Province at YaLong river. Upon completion, the dam was expected to deliver 6x 550MW of electricity. Total project investment was 28.5 billion Ren Min Bi (RMB). Of this amount, USD$930 million were loans from the World Bank and other sources.

The contract was also opened to international bidding. The project was completed in 1999, ahead of original schedule, within budget, and was of excellent quality.

The aim of the Project was to overcome the major power shortage in the Sichuan Province. However, during the construction period, two events took place which affected the project – new coal power plants were built which provided additional power supply of 158mega watts; and the city of ChongZhing is separated from the Sichuan Province and municipality directly under the Central Government.

Upon completion of the hydro-electricity project the city of ChongZhing declined to exploit this power supply and this created a situation where Sichuan had excessive power supply, wasted a lot of water and resources.

After many years of continuous effort from the Government and the project management team, this problem has been resolved.

Mr SK : How important are Project Management related certifications in your country?

Mr SK: Earlier you briefly mentioned about C-PMBOK®. Can you tell us more about this guide?

Prof WU: C-PMBOK® is part of the project management nationalization and standardization efforts.

C-PMBOK incorporates the strengths of various International Project Management Literatures such as PMI’s PMBOK® with consideration of the Chinese specific business and project conditions. The contents consist of Project Life Cycle, Project Management Knowledge Areas and Tools and Techniques to implement project in China. However, it has strengthen the contents for Conceptualisation phase and Transition phases from Development to Operation.

Mr SK : In your opinion what are the major challenges faced by Project Management practitioners in China?

On the same note, I would like to stress that PMI and IPMA has tremendous growth opportunities in China. China’s current booming market allows different players to find their niche areas and engage in their strengths.

However, project managers need to ask themselves whether this diversities help to promote Project Management practices or are stopping blocks ? And what they can do about it.

Mr SK: What are China’s Project Management standardization and localization efforts and what is your wish list?

Prof Wu: As far as standardization and localization are concerned, we have to integrate the local situations with the new elements imported from the West. We need to continue to innovate and improve. However, we cannot blindly follow what others are doing if it conflicts with local

I hope to see Project Management moulding Chinese various industries to innovate, transforming “Made in China” to “Created In China”.

In order to achieve this, we must first understand the uniqueness of managing projects in the Chinese environment.

For example, we need to know

the maturity of legal system for intellectual property and contracting, the element of ‘Quan Xi’ and ‘Drinking Culture’ in business and day-to-day life. To a certain extent all these contributes to project success.

We also need to update ourselves on the global trends of Project Management development. These includes areas such as how to further improve a Project Manager’s people skills , innovative ways to deliver Project Management education and training to all levels of stakeholders and buy-in from the senior management at Government and Chief Executive Officer (CEO)levels.

I also hope to see more constructive discussions taking place on the challenges and issues faced by current Project Managers in China and positive feedbacks on the Process of Standardisation and Localisation of Project Management in China via Internet, seminars and media publication platforms.

The Project Management community in the Greater China and South East Asia should hold more dialogs, meetings, discussions, seminars and conferences to further promote the collaboration and the integration of the profession.